The Holium protocol is a community-driven project and first implementations and related utilities follow the free and open-source software (FOSS) principles. Be sure to check at our design principles for more details on the ethos.

In this regard, any amendment to the protocol can be discussed as a Holium Improvement Proposal (HIP) taking part in a framework described below.

The primary changelog can also be found on the current documentation.

Most discussions within the community takes place on Discord.

Early software related to the Holium protocol can be found on GitHub.

The Holium Improvement Proposals repository is meant to create a space where users and members of the Holium community can discuss and track standards for the protocol.

HIPs must pass some validation tests that can be enforced with the hip-validator.

A Holium Improvement Proposal (HIP) is a design document providing information to the Holium community, or describing a new feature for Holium or its processes or environment. The HIP should provide a concise technical specification of the feature and a rationale for the feature. The HIP author is responsible for building consensus within the community and documenting dissenting opinions.

A HIP can go through 5 different phases: 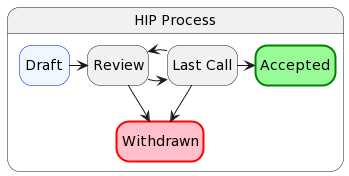 Maintainers are initially members of the Polyphene team. The circle of maintainers will be extended later according to conditions that are still to be defined.

A HIP should be written in Markdown format and a template should be followed. The template can be found on the HIP GitHub repository.

A HIP author marks a HIP as ready for and requesting peer review.

This is the final review window for a HIP before moving to accepted. A maintainer will assign last call status at the request of a HIP author and set an end date, typically 14 days later.

A HIP is moved to accepted when it has been in last call for at least 2 weeks and any technical change that was requested has been addressed by the author. The process for implementation developers to decide whether to integrate a HIP into their clients is not part of the HIP process.

If this period results in necessary normative changes (at a maintainer’s discretion), it will revert the HIP to the review status.

The HIP becomes a final standard. An accepted HIP exists in a state of finality and should only be updated to correct errata and add non-normative clarifications.

The HIP authors have withdrawn the proposed HIP, or the HIP in draft or review is inactive for a period of 6 months or more. This state has finality and the HIP can not be resurrected using a similar HIP number. If the idea is continued at a later date, it is considered a new proposal.