The CLI holds the reference implementation of the Holium protocol. It allows creating transformation pipelines locally, running them locally and exporting them for collaboration on a remote repository.

It all revolves around a few concepts.

With the CLI, transformation pipelines are directed acyclic graphs (DAGs) of nodes that transform data. Each node is an isolated function which solely focuses on transforming data, either by reorganizing it or running functions on them. In the latter case, these functions are executed in an isolated sandbox, do not react to any external event except to the data they are provided with as input parameters.

This data is serialized as HoliumCBOR values, thus freed from any semantic lock. Edges of the DAG are connections in charge of selecting and reordering parts of data to hand over to the next node. Simple linear DAGs are thus handled with 1-to-1 connections, but data at a node can just as well be used multiple times (the node has multiple children nodes) and multiple nodes may also collaborate to form the input parameter of another node (multiple nodes share the same child node).

In the context of the CLI, we may define three types of nodes to ease local construction of pipelines:

While these nodes only manipulate data within the Holium protocol, serialized with HoliumCBOR, bridges called portations are in charge of importing data from local files (JSON files, binary files,…) to pipeline source nodes or, in the opposite direction, export data hold by any node of the pipeline to a new file in the repository.

The Holium CLI is first and foremost intended for use in a local project, set up with git and dvc versioning. When initializing a project with the holium init command, a directory structure will be automatically set up using a common architecture followed by other tools like Pachyderm and organized around three areas:

By default, the two first areas are initialized in a .holium directory at the root of the project, with the following main components.

As discussed in the introduction, usage of the CLI is facilitated by the introduction of three types of nodes: sources, shapers and transformations. Their models are kept as simple as possible, adn their manipulation follows a strict Create, Read, Update, Delete, List (CRUDL) interface. 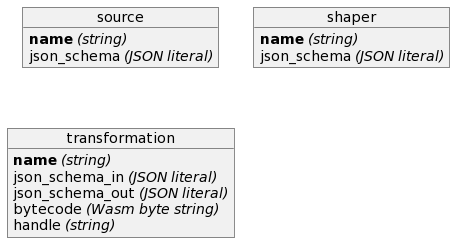 For each type pipeline node, refer to the embedded help commands to get more details on expected arguments:

Pipeline nodes in the local area can be connected through pipeline edges known as connections that use selectors to select parts of data from a tail node to be handed over to a head node. Their model is also kept simple and objects are manipulated through CRUDL commands.

One project may for instance hold two input files, input.json and input.jpeg, in the repository. Portations can be created to use these two files as input of a Holium pipeline, connected them its source nodes, while results of the execution could be stored in a new result.json file in the repository through another portation working in the other direction and connected to a tail shaper or transformation node of the pipeline.

Once a pipeline is ready for execution, with all of its node connected and forming a proper node, transformations can actually be executed with a simple command: holium project run. Nodes of the pipeline will automatically be sorted to be run in the right order, data will automatically be fetched from files targeted by import portations or data locally stored in the pipeline, and results will be written to files targeted by export portations.

Finally, at each step of the construction of a pipeline, before or after any execution, a local Holium project can be exported to the interplanetary area with a simple command: holium project export. Objects will automatically be added to your interplanetary area that strictly represents the current state of your pipeline through linked-data files, including node data if any.

The interplanetary area can efficiently be stored and shared on a remote repository or on IPFS so that collaborators can fetch it and import it to their own local area with the holium project import command.